Ashland Perspective: The Future of Food

Ashland Perspective: The Future of Food

I needed to write out some important thoughts after reading an article in the latest National Geographic (October 2014) about GMOs. I prefer to stay neutral in arguments like these, so keep that in mind.

On the other side, institutions like the IRRI (International Rice Research Institute) have been selectively breeding rice to help feed the world for decades, along with just a few genetically modified plants. They argue that genetic manipulation of plants is just a tool to be used to help feed the ever growing population of the world. I don’t disagree with them either.

The fact is, they are both right. Genetic modification has saved several country’s people from starvation, and considering that 60 percent of the world’s staple food is rice, I think they should keep going with it. I also truly believe that organic food practices should never die out, they illustrate a true connection between farmer and food, an important connection between human and plant. 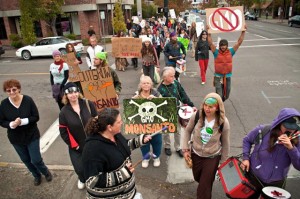 So where does the controversy really come from? There is such thing as an Organic GMO… Organic mostly refers to, no use of pesticides or unnatural fertilizers. GMO refers to the genetic manipulation of a living organism.

Though it maybe seems unethical to chop up a DNA strand, pull something out and put something in, scientists are not bad-hearted people. Their perspective of the world might just see it as more cut and paste than others. They see the universe as a set of intricate working parts, that when understood, can be tinkered with. I agree. With responsibility and wisdom, we, as advanced creatures, should be able to harness nature, while still living in balance with it. I think science makes us look good. And the wisdom that we need comes from the spiritual practices, that are often associated with the environmentalists and organic food advocates. Science makes us look good, and so does spirituality. Bureaucracy on the other hand…

It is my firm belief that the majority of this controversy comes from the legal issues surrounding GMOs. Monsanto, one of the largest GMO producing companies, has given a bad name to GMOs. They have, in my opinion, terrible legal practices. Unlike the IRRI, they work for profit and not for the feeding of humankind. They don’t allow farmers to keep seeds after a crop of Monsanto brand seeds. They require them to buy new seeds every year. They have sued several farmers for many silly reasons, such as farmers who did not purchase Monsanto seeds, somehow ended up with a few Monsanto plants in their fields. Now those farmers are homeless.

They also would never qualify as organic, because of their most famous accomplishment, what they call “Roundup Ready Seeds”. Plants that are resistant to the pesticide Roundup which is used on all their crops, and produced by Monsanto themselves. There are people that claim it’s dangerous to humans, and as you can imagine, Monsanto says it’s “fit for human consumption”. There is another seemingly dangerous genetic modification of corn that contributes to the controversy. A breed of corn that has been modified to produce its own pesticide, literally causes certain bugs to explode after ingesting the corn. Is that something you would eat?

There is always extremes and always a balance. If you find that you do not fully agree or disagree with sides of an argument, you might be open enough to find the balance. Personally I don’t think that anti-GMO protesters should go around burning down fields of crops, and I also don’t think it’s right for Monsanto to destroy the lives of farmers for the sake of protecting corporate profit. I don’t think that we should rule out genetic modification, and I feel it is very important to become more intimate with our plants and practice natural growing techniques. But let’s ditch bureaucracy for the most part, how many people really deserve to be sued by multimillion dollar corporations? I don’t think it’s right to patent a living organism either.

One final thought, food should be free. If there is one thing that tax money should be paying for, it’s food. We should all receive Food Stamps, no matter your level of income. Though I feel we can do without money, that will be for another post. As far as food, we should all receive a set amount of Food Stamps each month, and any additional food would be purchased by personal income. Let me know what you think in the comment section below.

About Thomas: “I feel it is my job to share my perspective,  honestly. I feel like the best thing I’ve ever done for anyone, is shared my perspective. From where I stand, everything looks the same, neutral, but full of life and potential. I can always find a way to put things in a picture, a big picture. I am the author of a children’s science series called “My Friend the Robot”, and have a public Facebook page called “The Unlearning Revolation”.

“Ashland Perspective” is a series of education, opinion, and editorial articles written by folks from Ashland, Oregon. If you would like to submit an article for consideration, please email us at info@insighttoashland.com.