It sure has been a busy year regarding the Ashland restaurant scene, with many new and exciting establishments opening.

In May we covered many of the Ashland restaurant openings that occurred over the winter and the early part of this year. It included information on NW Raw Juice Bar, the Lunch Show, Harvey’s Place, Granite Taphouse, Mystic Treats and the coffee and pastry walk-up window downtown that is now run by Four and Twenty Blackbirds.

Over the summer, a handful of new places have opened to the delight of taste buds and tummies for all of those who live in or travel to Ashland. We welcome a new BBQ joint, a tapas restaurant, a tea house, a crêperie, and a “gathering house” to the Ashland culinary community!

Any resident who has lived in Ashland for more than a year was quite familiar with the bar, restaurant, and sometimes-music-venue “Alex’s” that overlooked both the Ashland plaza and the Ashland Creek. Once that Ashland standby closed last year, the owners of Brickroom put together their plan to create a well designed, open layout for people to enjoy. They redesigned Alex’s old space and succeeded in making it one of Ashland’s most appealing indoor restaurant spaces, with a long, sleek bar and tasty food and beverages.

Brickroom’s menu is currently on the smaller side, a one pager that features just over a dozen small plates and a handful of sandwiches, salads and entree options. They are open from 4pm until close, with plans to open from breakfast until close in the future.

Whether you are eating outside on their front patio or back deck, or inside in their beautifully designed space, we believe you will enjoy a great experience at the Brickroom. 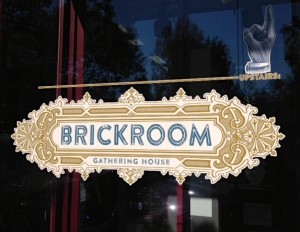 Another location that opened in a long-time – but now closed – Ashland culinary institution is Home State BBQ. After years of serving up coffee and treats on the south end of Main Street downtown, Evo’s Coffee recently closed for good. Home State BBQ took up residency in the quaint building and also nicely updated the space that they inherited.

For all the great cuisine variety in town, Ashland was in need of a dedicated BBQ restaurant and Home State delivered. Home State’s menu is fairly small, with 3 salads, 2 sandwiches, 3 “plates”, and a small array of sides, small bites and dessert options.

The location at Main St. and Gresham has a parking lot, as well as a deck and patio for nice outdoor seating options. They are open daily from 11am until 10pm, which is fairly late on a daily basis for Ashland – a good thing to keep in mind when you are wondering where to go late in the evening when many other locations have closed.

When you get a hankerin’ for some tasty BBQ and fixin’s, Ashland now has its own dedicated, tasty BBQ joint to satisfy your hunger.

Tapas are said to have originated when those drinking in bars in Spain would cover their wine glasses with pieces of bread to keep flies from disturbing their glasses of Spanish wine. The verb “to cover” in Spanish is “tapar”, which was the root word for “tapas” and a tradition then evolved to serve small plates of food with each drink order.

Having both studied in Granada, Spain – one of the last remaining spots in Spain that actually serves free tapas with adult beverage purchases – my partner and I have longed for a good Spanish tapas restaurant to open in Ashland. Eleven has fulfilled that wish.

Eleven is located in CJ’s Bistro old location on 1st St., between Main St. and Lithia Way in the heart of downtown Ashland. It is open from Tuesday through Saturday and has separate lunch hours (11:30am to 2pm) and dinner hours (4:30pm to close).

Ooo-la-laaa, Ashland now has a crêperie! Kelly opened her outdoor and take out only restaurant in the Railroad District earlier this summer, and it is open from Tuesday to Saturday from 9am to 2pm.

Crepes are a very thin and tasty pancake cooked on a special circular hot plate and then filled any number of fillings. Kelly’s Crepes offers up both savory (like “eggs, bacon and cheese”, “pulled pork and carolina slaw”, and “spinach with goat cheese, pine nuts and garlic butter drizzle”) and sweet options (such as “nutella and banana”, “strawberries with lemon curd”, and “raspberries with marscapone and chocolate sauce”). Gluten free options are available for those sensitive to gluten.

Kelly’s is located in Ashland’s “yoga triangle” (it shares a property with Ashland Yoga Center and is within a block of Rasa Yoga Center and Rose Yoga) on A St. and 4th, and is therefore an excellent treat to enjoy just after taking a yoga class.

No matter if you are feeling salty or sweet, or if you’ve taken a yoga class or not, Kelly’s is a great option for a quick, easy, and affordable outdoor eating experience in the Railroad District. 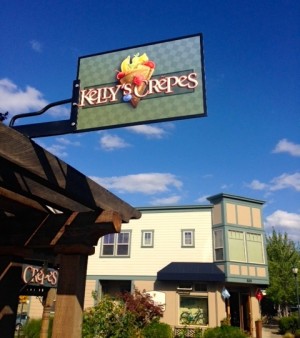 If you haven’t heard of Dobrá Tea before, it has a very interesting history. According to their website:

“Dobrá Tea began in Czechoslovakia during the last few years of Communism. Due to a shortage of foreign currency, high quality teas were reserved for the government and military elite. The founders and suppliers of Dobrá began as a group of young tea lovers (“devoteas”) who began meeting to sample rare Indian, Chinese, and Japanese teas smuggled into Prague from East Germany.

After the Velvet Revolution (1989), the devotees founded their official Society of Tea Devoteas (1992) and their first Bohemian-style tearoom, Dobrá Čajovna, in Prague (1993). The Tearoom became a shelter, where like-minded individuals could gather and taste the world of tea. The company began to spread its tea concept to cities and small towns throughout the Czech Republic.”

The U.S. now has about a half dozen Dobrá Tea houses and Ashland’s just opened this summer where Big Boy Hero was previously located (Granite and Main Streets). It offers an enormous variety of quality teas and a menu of light fare and gluten free desserts. They are open from Monday to Saturday from 9am to 10pm, and on Sunday from 9am to 7pm.

Ashland is full of amazing coffee houses, so it’s great to see a tea house open up – and one that has such an extensive list of teas that include green, white & yellow, oolong, black, pu-erh, chai, yerba maté, herbal, ice and bubble teas! 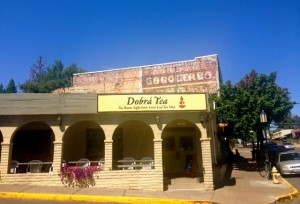 Insight to Ashland provides information on Where to Eat & Drink in Ashland, Oregon, and we specifically provide pages on Restaurants, Coffee, Bakeries & Desserts, and Nightlife & Bars, Wineries and Breweries.