Knowing the history and background of a town or city you plan to visit or move to is essential to understanding how it came to be and will certainly add depth to your visit or give you some perspective on the town if you are considering a move here. This is a synopsis Ashland’s history and how it developed into the progressive, small town of just over 20,000 residents that it is today.

Carbon dating shows that for over 7,000 years, the land in southern Oregon was occupied by different groups of indigenous people; the Takelma and Shasta/Chasta are two examples. These people were hunters of elk, deer and small animals, fishers of salmon and shellfish, and gatherers of nuts, seeds and berries. Their trails were the ones used by trappers and hunters who began arriving in the early 1800s. Many of the area’s geographic names given to streams, rivers, and mountains are derived from names given by Native Americans.

Homesteaders in wagons began traveling from the eastern United States before 1840, using those same Native American trails; this is the same era when gold was discovered in California and in other western states.

Building railroads westward wasn’t far behind and from the late 1880s until the mid-1920s, Ashland was the middle point for passenger travel and freight transport from Portland to San Francisco. In fact, on December 17th, 1887, a “golden spike” was driven into the ground in Ashland (right by today’s Railroad Park) to complete the railroad system around the country. The entire west was wide open for exploration, homesteading and gold mining. However, the settlers wanted the land that the Native Americans had lived on for thousands of years and this caused many intense, violent clashes. Sadly, the Native Americans were defeated and many were transported to reservations away from their home lands. 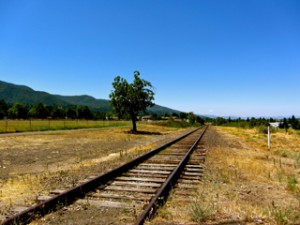 The year 1852 is considered to be the year Ashland, Oregon was founded. It was built upon the ruins of a Shasta settlement. Three early founders, Abel Helman, Eber Emery and Robert Hargadine, decided that providing supplies and services for the homesteaders and gold miners was an easier job than mining for gold. After making the first land claims in the Ashland area, they established a timber mill, soon followed by flour and woolen mills. The area became known as Ashland Mills. Helman donated some of his building sites to create a central district where other businesses such as blacksmiths, livery hires, butchers and carpenters opened shops.

Soon, a post office and schools were started. By 1872, a college opened that would ultimately become Southern Oregon University. Residents and shopkeepers began meeting in the current day Plaza vicinity and soon it became the social and business gathering place in town. Like the Native Americans before them, the infirm would partake of lithia mineral water while sitting in the sunshine in hopes of being cured. There was a plan hatched in the 1930s to build a spa, similar to many in Europe, but the cost and onset of World War II interfered.

The prosperous residents of Ashland naturally wanted good schools for their children and with the advent of the college and public schools, came a Carnegie library. The traveling Chautauqua arrived next in rural Ashland in the late 1890s and many people from the surrounding rural areas descended upon the town to participate. This cultural movement featured speakers, teachers, musicians, entertainers, preachers and humorists of the day. The Chautauqua events took place on what is now the site of the Elizabethan Theatre of the Oregon Shakespeare Festival. An opera house was built in town that was considered to be the finest between Portland and San Francisco and it hosted not only operas, but also dramatic plays and music, and was used for other community events. The year 1935 saw the opening, by Angus Bowmer, of the Oregon Shakespeare Festival. All these activities were the seeds for today’s highly visible artistic and cultural characteristics.

Ashland’s cultural vitality and Mediterranean climate attract people from many walks of life. Tourism and its related businesses fuel the economy in town. Bigger employers are Southern Oregon University, the Oregon Shakespeare Festival, health care providers, retirement living centers, and businesses associated with outdoor recreation. Real estate costs are a little above average and tend to retain their value due to the higher desirability of living in Ashland as compared to neighboring towns. 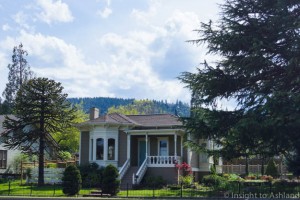 Ashland’s school system has three elementary schools, one middle school, and one high school. Ashland’s high school was named to the top 3% of high schools in the country by US News and World Report in 2007 and 2009. Southern Oregon University also calls Ashland home. SOU is a 4 year, public university with an enrollment of over 6,000 students and offers a wide range of educational opportunities, including undergraduate and graduate degrees, certificates, online classes, cooperative professional programs and pre-professional programs.

Ashland’s progressive atmosphere today is conducive to and accepting of human creative endeavors of all kinds: visual arts, literary arts, dramatic arts, and performance arts. Along with acceptance of artistic endeavors comes acceptance of human differences. All of this rolled in together creates a town that is fairly liberal in its outlook and politics and a place where people can “live and let live.” The highly developed culture, great natural beauty and progressive outlook make Ashland, Oregon a wonderful place to visit and to call home. 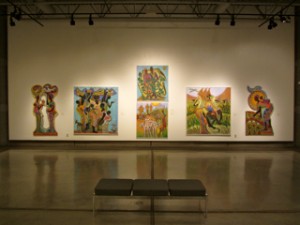