Page: Insight to Ashland » What to Do in Ashland Oregon » Ashland OR Arts, Culture & Entertainment » Movies in Ashland OR

Movies in Ashland OR

Ashland may be a long way from Hollywood, but for a small town it takes film pretty seriously.

Movie lovers can catch most mainstream features at Ashland Street Cinema in the Ashland Shopping Center, which has six screens and plenty of showtimes.

The local film scene really surges every spring when more than 7,000 movie buffs descend on the town for the Ashland Independent Film Festival. Spanning five days and showcasing more than 80 films, the festival offers international and domestic features and shorts from almost every genre, including drama, comedy, documentary and animation. Since its inception in 2001, this small but successful festival promotes local and independent filmmakers, while also bringing just the right taste of Hollywood glamor to Ashland every year.

The Ashland Independant Film Festival organization has more recently created the “World Film Week” in October and the “Daedalus Film Fest” in August. The latter (in conjunction with the Oregon Shakespeare Festival) both examines the HIV/AIDS epidemic and raises funds to support those living with HIV/AIDS. 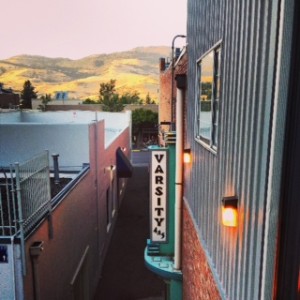 Varsity Theatre in Downtown Ashland OR

Movies in Ashland OR