Page: Insight to Ashland » What to Do in Ashland Oregon » Theatre Ashland OR

“All the world’s a stage, and all the men and women merely players. They have their exits and their entrances; And one man in his time plays many parts” – William Shakespeare

Ashland and theatre go hand-in-hand and there are several institutions offering opportunities to enjoy a show or even hone your own acting skills.

For over 75 years, the Tony Award-winning Oregon Shakespeare Festival (OSF) has produced the Bard’s works for thousands to enjoy. There is no other Shakespeare festival in the US that runs for nine months a year (mid-February to early November). OSF produces eleven works each season – four by the Bard and seven by classic and contemporary writers.

Over the years, the presence of the Oregon Shakespeare Festival in Ashland has catalyzed new theatre troupes, groups and arts education programs to emerge and grow. The Theatre Arts Program at Southern Oregon University is an incubator of talented young performers who often move on to OSF or to theatre troupes throughout the US and the world.

Over 25 years ago, the Oregon Cabaret Theatre began producing original and contemporary works in its 140-seat theater housed in a renovated Baptist church. It offers fine dining and beverages during five productions a year which run from early February until New Year’s Eve.

Incubation of the performance arts happens throughout Ashland and not just at university level. The Ashland Children’s Theater offers classes and summer camps that can set the stage for your youngsters’ future dramatic aspirations.

Both children and adults can learn a montage of theater skills, classic and modern dance and movement, and circus arts at Le Cirque Centre. Adult classes in aerial dance is a different type of fitness activity that develops strength and coordination.  Children’s aerial classes include silks, dance, trapeze and more to instill children with creative skills they can use the rest of their lives. Performances are scheduled throughout the year.

Since 1992, the Ashland New Plays Festival has encouraged playwrights to create new works via its international competition which culminates in the public reading of four new plays chosen from hundreds of submissions. Often professional actors from OSF participate in the readings along with community members.

High school drama clubs are very often the catapult that send teenagers into the exciting and creative world of performance. It can be the saving grace for many youth. The Ashland High School Drama Club produces several plays through the school year in the Mountain Avenue theater.

A few miles north in of Ashland is the town of Talent, home of the Camelot Theatre Company. Previously housed in a former feed store, the company now has a state-of-the-art 165 seat theatre for its year-round performances.

The Craterian Theater at the Collier Center

Drive another five miles or so north to Medford to arrive at The Craterian Theater at the Collier Center for the Performing Arts. The center is host to a wide variety of performing arts – drama, comedy, and opera to name a few.  Visit their website to find out about its connection to Ginger Rogers and upcoming events.

Medford is also home to The Randall Theatre Company, whose six productions per year vary from musicals to drama. It operates workshops for teens and adults as well. 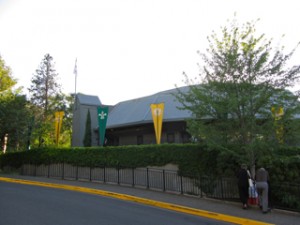 Oregon Shakespeare Theatre in Ashland OR